The Secret Code of Teenage Texting

As a psychotherapist who primarily treats teenagers, I am very aware how important texting is to teenagers. It is the primary way that many teens communicate with each other. This seems harmless, but it can be very dangerous.

Many of the apps teenager’s use involve texting. Many of these sites allow teens to text with teens all over the country and the world. As a result it is done via computer websites, many teens may not know who they are texting to. There are many sexual predators that go on these sites looking for teenagers to prey on.

For these reasons and many others, many parents are worried about what their teens are texting about and to who. There are apps parents can install on their teens’ cellphones to monitor their teenager’s texting. However, many teens are aware that their parents may be monitoring their texts. Therefore, many teenagers have developed ways to hide their texts in apps on their cellphones and a code language for texting. This code language makes it very difficult for parents to know what their teen is texting about or who they are texting to.

The other day I was reviewing a post by “My Body is My Body.” They provided a list of codes many teenagers use to text secretly. Knowing these codes can help parents be more aware about what and who their teenager is texting to. I have included the code list below: 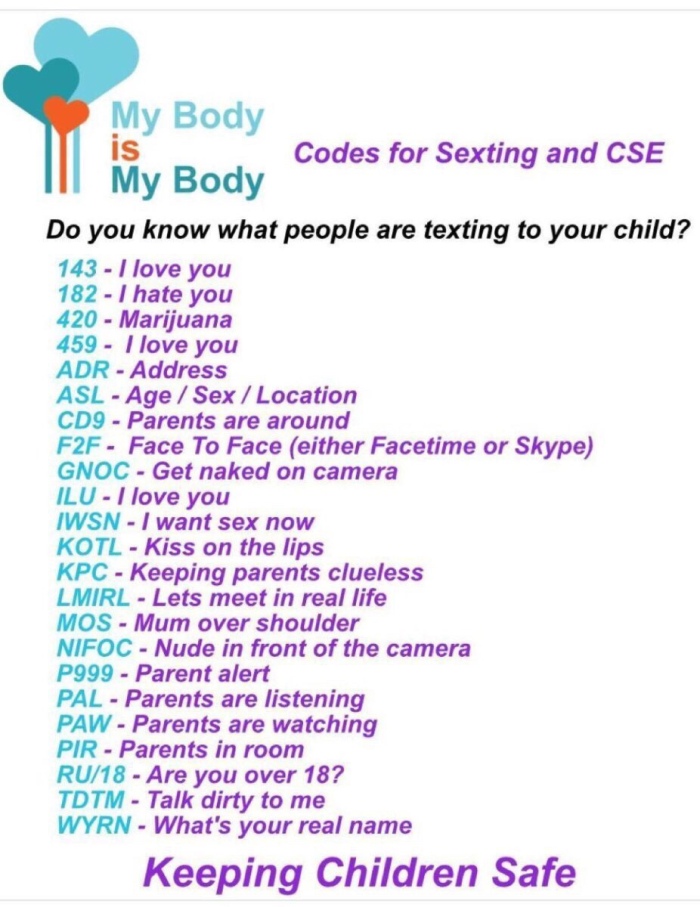 Understanding Teenagers by Dr. Michael Rubino Dr Rubino is a licensed psychotherapist and he specializes in treating teenagers, children and trauma. Also Dr. Rubino serves as an advocate for children who need IEPs at school. Dr. Rubino received his Bachelor's degree from UC Berkeley & his doctorate from CSPP-Alameda. He is considered an expert and has appeared on T.V. & radio shows about teenagers. He is on the National Board of Alive & Free. Dr. Rubino also is one of the few therapists who conducts an anger management group for teens. He also is a Court appointed therapist for children who are involved in a high conflict divorce. Dr. Rubino has been licensed for 20 years. To learn more about Dr. Rubino visit www.RubinoCounseling.com.
Published April 21, 2018April 27, 2018