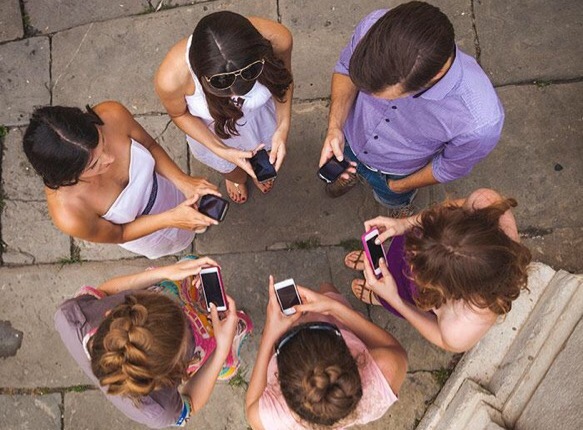 A common argument I hear daily in my office is how much time should an adolescent be spending on their laptop or their smart phone. Parents typically believe that their adolescents are spending too much time on their cell phones and laptops. Of course adolescents feel that their parents are being unfair and not allowing them enough time on their cell phones or laptops. Adolescents typically say they need their laptops and cellphones for homework and to communicate with their friends. They feel that their parents don’t understand how the world works today.
Today’s adolescents have grown up with laptops and smart phones their entire lives. Texting is a very common method of communication for teenagers too. However, most parents grew up when laptops could not do as much and cellphones were typically only used for making a telephone call. Therefore, there is a difference of opinion regarding how teenagers should use technology and how their parents have used technology over the years. Especially, because when parents were teenagers themselves technology was not so prevalent.

Besides parents and teens having different views about technology. Parents are worried that their teenager is becoming addicted to their cellphones. Having seen how some teens react to having their cellphones taken away, I can understand why some parents feel their teenager is addicted to their cellphone. However, parents have additional concerns too. Parents are concerned that with all the texting teens do that their teens are becoming anti-social. Other concerns are the amount of bullying that occurs online, the sexual perpetrators that are online and how easy it is for teens to obtain drugs online. Another concern is that their teen may be involved in sexting or sending naked photos of themselves while on line. Sexting is a relatively new phenomenon so we don’t have a great deal of information regarding it.

However, we do have evidence to support parents’ concerns. There are numerous examples of cyberbullying and examples of teens commuting suicide due to cyberbullying. There is evidence of child predators using the internet to prey on teenagers. There is also evidence of teenagers being able to access drugs easier and engaging in sexting and sending sexually explicit photographs of themselves via text.

Therefore, there are reasons for parents to be concerned. While there are research studies which indicate that there are reasons to be concerned about how much teenagers use cellphones and go online, there is also research showing there is reason to be concerned about what teenagers are exposed to online and can access online. Some studies do conclude that teenagers spend to much time daily online and on their cellphones. Some studies indicate that teenagers should be limited to one to two hours per day online. The American Psychological Association has considered including a diagnosis of internet addiction in the Diagnosis and Statistical Manual. However, because the amount of people using cellphones and the internet in numerous ways, there is no agreement about what defines an addiction and what is normal usage. Therefore, parents are encouraged to monitor their teens and use their own judgement regarding rules involving cellphones and the internet.

While, there is research indicating that the internet can pose a danger to teenagers, there is also research showing that there are benefits to the internet and cellphones. The research has shown that teenagers who are depressed, anxious or questioning their sexuality that they can find cites online where they can talk with other teens feeling the same way. Texting has been shown as a way friends have identified other friends who were thinking about suicide and get their friend help. In fact, just this week, Facebook has added additional ways that people can get help for someone especially if they feel their friend might be suicidal. Many teens I work with find it easier to open up to friends or parents via texting or emailing at times. Therefore, while research shows there are reasons to be concerned, there are also studies indicating that cellphones and the internet can provide positive benefits to teenagers.

Therefore, what do parents do? At this point there are no firm answers because this technology is so new. So parents need to pay attention to the news and research studies that are being reported. Furthermore, parents need to have conversations with their teenagers and educate their teens about the risk associated with texting and the internet. Also parents need to use their judgement and set rules regarding cellphones, texting and using the internet that they feel are appropriate. Currently, the accepted amount of time for a teen to be online recreationally so for fun and this doesn’t include homework is one to two hours a day.

Dr. Michael Rubino is a psychotherapist who specializes in treating children and teenagers. Dr. Rubino does treat teens and adults who feel they are addicted to texting or the internet. For more information about Dr. Michael Rubino’s work or private practice visit his website at http://www.RubinoCounseling.com or his Facebook page at http://www.Facebook.com/Drrubino3.